Following the anti-China sentiments and social media uproar against Chinese apps in India, a lot of native apps have started to garner users who are migrating from these apps. One such app has turned out to be Chingari, which has crossed the 2.5 million download mark recently. However, the co-founders of the app differentiate themselves from developers who are trying to cash in on the “boycott Chinese” sentiments. The Google Play page shows Chingari app was released in November 2018.

“Unlike its competitors in the Google Play Store that are just cheap copies of a 50 USD script available on Envato and that are only getting some traction due to the ‘boycott Chinese’ sentiment in the country, Chingari has been engineered and developed for over 2 years with regular feedback from the users,” said Sumit Ghosh, the co-founder and Chief of Product and Growth.

The short video sharing app reached the milestone from 550,000 downloads in just 10 days. Sumit Ghosh, the co-founder and Chief of Product and Growth, said that the top 20 per cent of its most active users are spending 1.5 hours daily on the app and the average daily engagement time for its users is 7.5 minutes.

Just like VMate, Chingari pays its content creator on the basis of how viral the video becomes. For every video that users upload, they get points per view which can be redeemed for money. Chingari is available for both Android and iOS. Once you install and open the app, it will show you its Term of Service and Privacy Policy, which you need to accept in order to use the app. Now you need to choose a language from amongst Hindi, Bengali, Tamil, Gujarati, Kannada, Marathi, Telugu, Odiya, English, Malayalam, and Punjabi. As soon as you select the language, it takes you to the app which has three main screens or tabs— Videos, News, and Game Zone. However, the first thing that catches your attention is the top banner ad to play quizzes on the app.

The video part looks similar to the likes of TikTok, Likee, and VMate but with some differences and lesser functions of course. You can swipe up or down for more videos but cannot swipe right for the creator’s profile. Instead, you need to click on the user’s picture at the bottom to see the profile, which again doesn’t showcase the videos from the creator in tile format but has a timeline design. 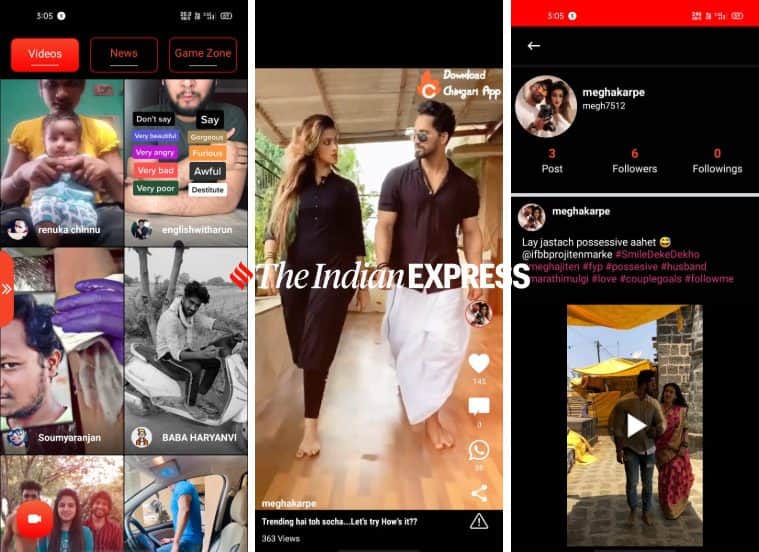 I spent some time on the app and wasn’t impressed by the video part. The Chingari app could have garnered more than 2.5 million downloads but there is a lack of creators as well as viewers on the platform. The video making tool needs some improvement as well as more filters and stickers. Also, it looks like the major user base of the app spend their time on News tab or Game section as my feed did not show me a single video that had more than 2,000 views and I could not find a creator with more than 100 followers.

The Game Zone looks like a neat addition to the Chingari app for those who like to play quiz and mini-games to earn points or Paytm cash. On the app, you can play Bingo and Quiz or choose a game from a long list of mini-games that also include popular games like Cut the Rope, Sudoku, and more. To play any of these games, you need to wait a bit before the game loads within the Chingari app. Depending on the size of the game, the wait time could wary.

I liked the News tab on the app, which turned out to be a reliable source of information. You can follow your favourite news publishers to access them with a single tap or consume news category-wise. The News tab also has a ‘For you’ section but I cannot comment on its efficiency based on my limited time with the app. To read a news article, you do no need to leave the app. Once you click on a news article, the website opens within the app’s in-app browser. Apart from these three tabs, Chingari app has a nice little feature that I found quite useful. You can download the WhatsApp Status using the application with just a single tap on the condition that you have already opened the Status in WhatsApp. To use the feature, tap on the arrow button towards the left and tap on WhatsApp Status to see all the status segregated into images and videos, which you can download with a simple tap.

What’s the Deal with Hybrid Mattresses?

Focus On Resource Efficiency And Quality May Help Auto...

With the launch of new super specialty hospital in Delhi and Gurugram, Nayati Healthcare...

Choosing a Career in Fitness Industry

It doesn’t matter in which environment you decide your work, as long as you love...

OYO has roped in former IndiGo president Aditya Ghosh as...

MMUs like Niira Radia’s Nayati Healthcare are taking quality medical care to the...

Jeff Bezos mentioned in an internal meeting, that Amazon's lifespan will not big...

This site uses cookies. By continuing to browse the site you are agreeing to our use of cookies Find out more here